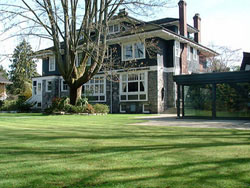 In 1885, the provincial government gave the CPR 6,000 acres of prime land in the heart of Vancouver. Of that, the company selected Shaughnessy Heights as the best location for its premier residential subdivision. Named after CPR president Sir Thomas Shaughnessy, with its main streets bearing the names of the CPR's board of directors, the CPR's influence on the area called Shaughnessy is unmistakable.

In 1907, Richard Marpole, general superintendent and executive assistant of the CPR, proposed development of an exclusive and prestigious residential area that would lure the city's elite from the West End. The railway hired Montreal landscape architect, Frederick Todd, and Danish engineer, L.E. Davick, to lay out curving streets and generous lots. Although lot prices were comparable to other Vancouver neighbourhoods, the CPR protected Shaughnessy's exclusivity by requiring that all houses built in the area cost at least $6,000; significantly more than the $1,000 a standard bungalow might cost. 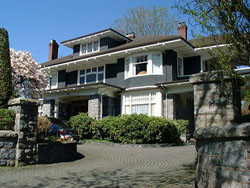 The homes of the rich were surrounded by lush lawns, hedges and tree-line boulevards that followed the contours of the local terrain to the Crescent; a circular drive of expensive property located on the crest of the hill overlooking the city.

By 1914, there were 243 houses in Shaughnessy and 80 per cent of the homeowners were listed on Vancouver's social register. The area's appeal was so great that the CPR developed adjacent land as "Second Shaughnessy" and "Third Shaughnessy."

The CPR took great pains to protect Shaughnessy's exclusive character, and the value of its lots. In 1914, the railway attempted to establish Shaughnessy as a municipality separate from Point Grey. The provincial government refused and instead passed the Shaughnessy Settlement Act of 1914, restricting development to single-family houses.

In 1922, Shaughnessy was placed even farther from the reach of City zoning laws, when the province enacted the Shaughnessy Heights Building Restriction Act, prohibiting the subdivision of lots and limiting construction to one single-family dwelling per lot.

In the thirties, the Depression hit Shaughnessy hard. Many Shaughnessy residents fled to other parts of the city and had their homes repossessed. Despite provincial restrictions, many single-family houses were converted into rooming houses or multiple conversion dwellings. 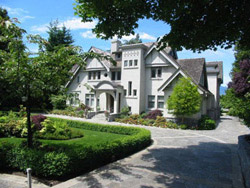 Shaughnessy Heights is Vancouver's best example of a planned community. In 1907, the CPR spent more than one million dollars developing the site before it began selling the high-priced lots. The estate-like character of the community is a result of a combination of large lots, winding boulevards, and extensive landscaping.

Many of the homes in First Shaughnessy were designed by the city's leading architects including Maclure & Fox, Parr & Fee, Sharp & Thompson, and Thomas Hooper. The architectural styles used during this period range from English Arts and Crafts and Tudor Revival to Craftsman and Colonial Revival. 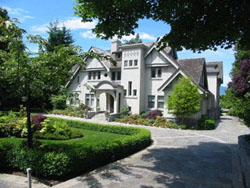 Today the area is one of the city's most valuable heritage landscapes. Its premier heritage structures include The Nichol House at 1402 McRae Avenue, the Frederick Kelly House at 1398 Crescent, the MacDonald House at 1388 Crescent, the Fleck House at 1296 Crescent, and the two houses featured below:

Hycroft, 1489 McRae Avenue Built in 1909 for B.C. industrialist A.D. McRae, Hycroft was the largest and most expensive mansion in the city. In the 1920s, the McRae's New Year's Eve costume ball was the highlight of the busy Shaughnessy social calendar. The grand home had three large gardens, an enormous greenhouse, riding stables, tennis courts, guest house, and a ballroom underlain with seaweed to give dancers more bounce. Inside there was a wine cellar, mirrored bar, a variety of dens, drawing rooms and a solaria. Hidden passageways ran parallel to the family's quarters, making it easy for servants to go about their work. In 1962 it was purchased by the University Women's Club, and every year the public is welcome to view the house during the annual Christmas craft fair.

Glen Brae, 1690 Matthews Street Sawmill owner William Lamont Tait instructed architects Parr and Fee to design him a Scottish baronial-style home that he named Glen Brae (meaning valley of the mountains). The result is perhaps the most memorable mansion in Shaughnessy.

This unusual 1910 home features a pair of twin towers with dome roofs on either side of the grand entrance porch, and an outstanding wrought iron fence imported from Glasgow. In 1992, owner Elizabeth Wlosinski willed the home to the City. It is now the home of Canuck Place, a hospice for children.